On Saturday 2 December, members and guests attended the Club's annual Trophy Night which was held at the Coffee Club premises in Buderim.  As well as the presentation of trophies and awards to the winners of the competitions held throughout the year, attendees took part in a trivia competition on the subject of billiards and snooker.  This was won by Rob Ward who received a bottle of wine for his efforts.

Trophies and awards for the winners and runners-up in the the various Club competitions held throughout the year were presented.  Among these were the following:

Bernadette McMahon was on hand to present the Crosby Shield for the Club's major Handicap Competition which was won this year by Mike Dickens, beating Andy Marshall.  Bernadette is the daughter of Vince Crosby who donated the perpetual trophy to the Club.  Well done Mike!

The President, Bob Pearce, presented the Chadwick Shield, the perpetual trophy for the Open A Grade Snooker Champion that was donated to the Club by William Chadwick who was the Club's first treasurer.  This year it was won by our Treasurer/Secretary, Jeff  Pickering, who beat Matt Shepherd in the final.  Congratulations Jeff!

Another notable achievement was that of Josh Thrift who was presented with an award for the Most Improved Player by our coach, Mike Naray.  Josh's game is coming on in leaps and bounds - and he's only 12 years old!  Keep it up Josh!

One of our lady players, Mandy Oliver, teamed up with Rob Ward to win the Brian and Keith Bowser Shield for the Snooker Pairs Handicap Competition.

The Gavin Baynham Shield for B Grade Snooker  was won by John Knoch with Gavin the runner-up.

The Champion of Champions competition was won by Rob Ward, with Mike Dickens the runner-up.

This was the first time the Club has used the Coffee Club as a venue for Trophy Night.  By all accounts, everyone found the evening very enjoyable and the food and service from the staff was excellent. 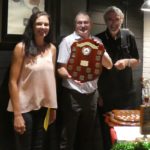 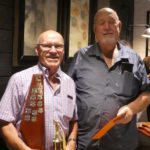 View all posts by: Bob Pearce