Earlier in the year, when Jeff and Ian attended a talk on the history of the Buderim War Memorial Community Association (BWMCA), during their 75th anniversary celebrations, they were asked by the events coordinator of the Buderim Foundation if they would give a talk to the Foundation Ambassadors. This would include a morning tea for a group of about 20. This was an unusual request but as the Foundation does such a great job and as they are both linked to the BWMCA they agreed.

On the morning a group arrived and in the main hall behind the clubhouse. Ian outlined how the club operates, membership etc. and a brief summary of our history. They then took the visitors to clubroom where a few members were playing. the members were surprised at the interest shown. There were a number of questions about the tables, the games etc. and it must be said the members present were very helpful. In particular there was considerable interest in the board showing past Presidents etc. many of the names were familiar to the longer term Buderim residents.

The group returned to the main hall where they had morning tea (prepared by Jeff, Rob and Ian). During that time there were more questions, Rob asked how much the foundation gave to charitable and not for profit organisations throughout a year and the figure is quite staggering. This is all collected through donations.

This organisation is a voluntary organisation and if you get the chance to support them in their endeavours please do so.
A great bunch of people.

The following article appeared in the Buderim Foundation September newsletter. 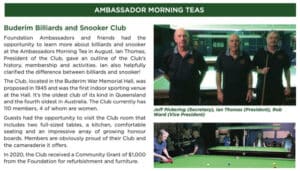