As previously announced, Josh Thrift has been selected to represent Australia in the U16 Snooker World Championships which take place in Russia in August.  Since the announcement, Josh has attracted a lot of media interest – the most recent being the subject of an article in the Buderim Chronicle as well as a segment  on the local WIN news.  Hopes are high that Josh can perform to the best of his ability in Russia.  Don’t forget that his family have launched a ‘Go Fund Me’ campaign to which supporters can contribute in order to help meet the considerable cost in getting Josh to the tournament. 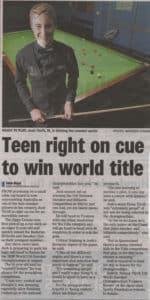