Andreas Herbel has won the 2011 Kilcoy Shield Intermediate Snooker Competition on Tuesday 22 March 2011. The final was played against Michael Dickens after a 6 week long knockout competition for intermediate grade snooker players at the club. The competition was also the running Nev Brockett Shield this year.

Andreas played very well to win 2 - 0 with his long pots a highlight of the match, while Michael was unlucky not to force a closer contest.

The match was one of three snooker competition finals played on the night, starting with the B grade and intermediate matches and culminating in the open final starting at 8pm. 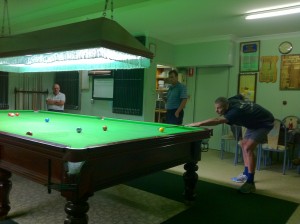 Andreas playing a shot during the 2011 Intermediate final