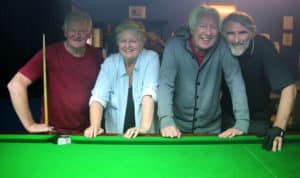 On Tuesday 14 August 12 players took part in the annual handicap competition between teams representing the President and  Vice-President.  After the draw was made a round-robin pairs competition was held on each table.  The final was between the best-performing pair on each side.  This year’s final saw the President, Bob Pearce, and his partner Bob Lewis take on the Vice-President’s team of Judith Swanson and Peter Taylor.  In a very competitive game the pair of  Pearce and  Lewis managed to achieve a narrow win.  The evening concluded with refreshments and pizzas.  The event was conducted in a very friendly and relaxed atmosphere to the enjoyment of all concerned.